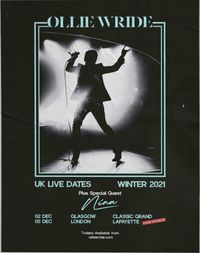 Ollie Wride performs his first solo show to date in Glasgow at Classic Grand, following a spectacular worldwide live stream performance at London’s Lafayette in March this year and a sold-out debut show at the Camden Assembly in 2019. Also known as songwriter and lead vocalist for San Francisco, synth pop act FM-84, Wride’s live performances together with his band, are both exhilarating and captivating, embodying the role of the otherworldly outsider providing a vehicle for his special brand of electro-rock pop songs that are more than just a nostalgia trip.